Cryptocurrencies are worse for the climate than you think

I came across a pretty astounding article the other day. The author of the article conducted a survey, asking a panel of 2,000 Americans familiar with cryptocurrency what impact they believe Bitcoin has on the environment and climate change. The results were as follows:

For those of you keeping score at home, that's a total of 58% of respondents who believe that crypto is either a neutral or a positive influence on the environment. It's hard to believe that this could be the case when some scientists warn that Bitcoin alone could produce enough emissions to push us past the 2°C global warming mark by 2032. I think that the scale and urgency of the climate risks of cryptocurrencies are often misinterpreted when presented at an aggregate level, so I set out to compile some statistics on how to view crypto consumption through the lens of the household and marginal consumption.

At the household level

You might have seen articles like this one and this one stating that the Bitcoin1 network now uses more electricity than many large countries, like Ukraine. On one hand, this sounds like a lot: Ukraine has over 45 million people, and is about the same size as Texas. On the other hand, I think aggregate statistics like this can serve to obscure the issue. After all, Bitcoin is taking the world by storm, and is a global network - maybe it makes sense that it would rival some countries, even large ones. Comparisons to foreign countries also ask the reader to not only think about the question at hand (how wasteful are cryptocurrencies?), but also a geographical one (how large and developed is Ukraine?). It doesn't help that 2/3 of Americans couldn't even locate Ukraine on a map before March.

I find it more illuminating to approach the issue from a much more granular level. Each Bitcoin transaction consumes around 2,150 kWh as of the time of this writing. The kWh unit stands for kilo-watt hours - a watt is defined as one joule per second, so a kilo-watt hour is equivalent to consuming 1,000 joules per second for one hour which is 3.6 megajoules. The only everyday reference most of us has for joules or watts are our light bulbs. One way to think about the Bitcoin energy usage then is that one transaction uses as much energy as keeping a standard 60W light bulb lit for 35,833 hours. That's almost exactly 4 years. Of course, 60W light bulbs are being phased out because they're so inefficient. Modern LED bulbs are more typically in the 10W range, so by that standard a Bitcoin transaction is more like 24 straight years of light bulb usage. Do you like to dabble in cryptocurrencies, and also turn off your lights when you leave a room to save energy? Don't bother.

Even the light bulb example can be hard to wrap your head around because us humans are not great at thinking about very large numbers. 24 years is longer than Bitcoin has even been around. Perhaps a better comparison is to look at household electricity consumption. In the US, which is among the countries that uses the most electricity per capita, the average household uses about 11,000 kWh per year. In these terms, your Bitcoin purchase uses about as much electricity as 2.5 months of every other thing you use electricity for. Did you make a round-trip transaction by also selling your Bitcoin at some point in the year? Now those two transactions account for close to half a year worth of all your other electrical uses.

The article I linked to above from the U.S. Energy Information Administration has a useful chart breaking down energy consumption for the average U.S. household by end use. Here's a reproduction of the same chart, with an added bar for the energy consumption of a single Bitcoin transaction. 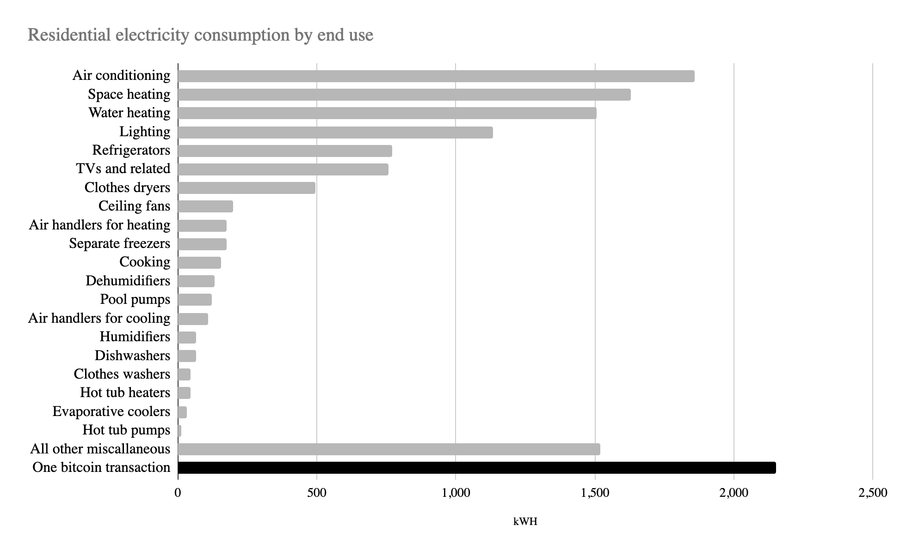 That's correct: on average if you make one Bitcoin transaction in a year, the electrical impact of that purchase is larger than any other use case in your household for the full year. Note that this calculation does not presuppose that you purchase a whole Bitcoin. It is equally true for any fraction of a Bitcoin you might purchase - it's the number of transactions that count, not the size of the transaction2. Of course, as any good financial adviser worth their salt would tell you, it's usually not good to try to time the market with a single purchase of a financial asset, and so you may be want to invest regularly in your cryptocurrency of choice. Most Americans are paid every two weeks, so if you were to practice common financial advice of diverting a portion of your paycheck to investments, you'd on average incur a transaction 26 times per year. Here's how that would look like on the same chart: 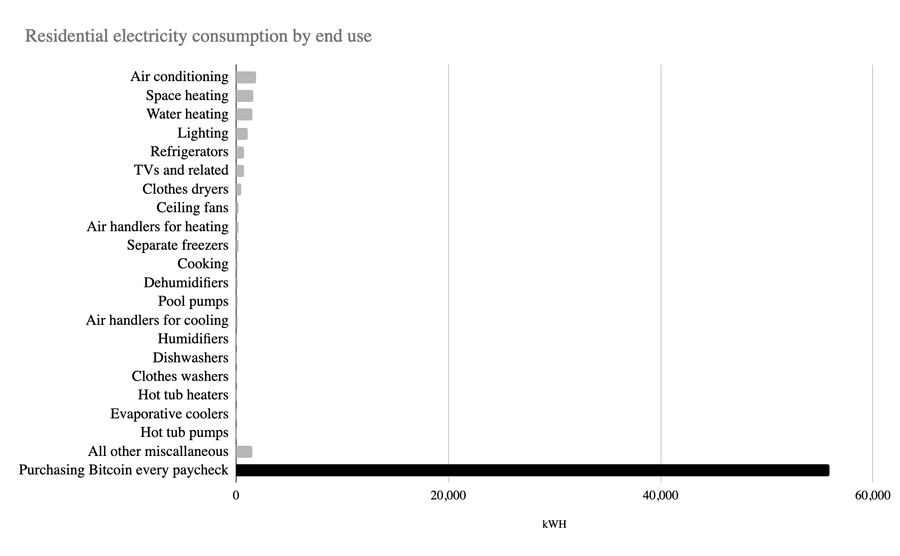 At the incremental level

Another effective lens to view cryptocurrency energy consumption through is that of global incremental energy usage. Thankfully, cryptocurrencies do not yet account for a significant percentage of aggregate global electricity consumption, but just as we have seen some pretty meteoric increases in the price of many cryptocurrencies, the electricity usage of crypto networks is also increasing at an alarming rate. The IEA estimates that the total change in electricity generation between 2019 and 2021 equals around 1,753 TWh. In the same time-period, Bitcoin's consumption has grown from 38 TWh per year at the end of 2018 to 200 TWh in 2021, an increase of 162 TWh per year. This means that close to 10% of all new electricity generated each year has gone to Bitcoin mining. There are roughly 250,000 Bitcoin transactions per day, so even if each of those transactions came from a different individual, it means that a maximum of 0.003% of the world's population interacts with the technology per day. For us to blow 10%3 of our new electricity generation each year on a technology that quite frankly could never serve to replace current payment networks is insane.

[2] Technically, it's limited by number of bytes, but the bytes of a transaction are not very dependent on the size of the transaction. ↩︎

[3] That's 10% for now, but crypto electricity usage is still growing at a faster pace than average global consumption so that percentage will go up over time. ↩︎